The First Thousand Years in the village of Bexwell, a mile or so east of Downham Market, stands 'the church of St. Mary the Virgin. There are no records to show precisely when it was built; if there were, the people of Bexwell might by now have celebrated the thousandth anniversary of the inauguration of their church.

Most of the 175 round tower churches still standing are in East Anglia, and Bexwell has one of the 124 to be found in Norfolk. This tower is interesting in that it is made of the local carrstone, but the pieces in the lower part have a fissured surface, placed at random, whereas higher up the pieces are different and have a pitted surface, are more regular in shape and laid in courses. It is believed that the lower half of the circular part of the tower was built at the same time as the west end of the nave, and part of the nave's north and south walls, probably in Saxon times. There are also two blocked circular widows in this lower part of the tower, facing north and south, defined by the frame of the arch made from carrstone pieces. There then appears to be a change in the masonry, though not in a straight line, possibly indicating work after the top of the earlier tower had fallen. Within the top of the circular part are ten openings, each with a recessed inner arch in Norman style, for the former belfry and now blocked with medieval bricks. At first floor level on the west side is a doorway, which was constructed from an earlier Norman window with a single splay. Then in the 15C the present octagonal belfry was added with dressed stone quoins and openings, and with a parapet. There is one bell. There is one old window with a carrstone frame, of Saxon origins, left in the north nave, quite close to the north doorway. The north chancel wall has a straight diagonal line ascending it, where the former Rood stairs climbed, i.e. it did not have a spiral-stair turret. The entrance to these stairs can still be seen in the chancel. Victorians altered some of the windows in the 1874 restoration, in particular the east window which was shown as a four-light window with intersecting Y tracery. It is now formed of three lancets, the central one slightly taller, all with simple trefoil heads. The tall lancets to the east of the nave doorways are also 19C insertions, with the new work around them in carrstone clearly visible. The older parts of the walls still have traces of render covering the carrstone.

There is a 13C south porch, with a brick relieving arch set above the later Tudor entrance arch. Above the inner doorway is what must have been a fine, vaulted, statue niche, now containing a modem figure of the Blessed Virgin Mary.

The very plain, possibly 14C font, stands close to the round headed, Saxon, tower arch which is supported on simple chamfered imposts. By the north door can be seen the interior of the Saxon double-splayed nave window, which displays the head of Christ. He has forked beard, which was in fashion at the time of Richard II, 1377-1399, so it is probably 14C glass. Opposite this is a similar window now blocked by the porch. The other nave windows have Victorian patterned glass, the tall lancets with an angel in the north one and the Blessed Virgin Mary in the south one. The four other windows in the nave have some dark medieval roundels in the tracery, and small modem shields half way up, the south one having ones for the local families, the Hares and the Pratts. There are two interesting 17C memorials, one on either side of the nave. To the south is one for Henry Bexwell, +1654 which includes typical scythes, grave digger's spade and an hour glass. Opposite is one for Francis Bachcroft, +1658, which might have been erected a bit later as it is of a more classical design with swags, curtains and a cherub's head. Both have Latin inscriptions and feature their heraldic achievements.

The carved Caen stone pulpit is a definite Victorian statement. One trefoil-headed panel shows a font with a suitable baptismal text, another has a chalice and paten with a text from the Eucharist, and the centre one shows the figure of Christ carrying the Cross, carved in alabaster, again with a text above it. Around the top is a frieze with deeply carved foliage, and this also appears between the arches, with a dragon at one point, and a bird eating fruit at another, above the short dark marble pillars dividing the panels. The whole stands on a central column and freestanding legs. Moving through the low modern stone screen into the chancel, the recess on the left was the doorway into the Rood stairs. It now houses the cross from the Great War grave of 2nd Lt Charles Dean Prangley, the son of the Rector, who died 25th September 1916, aged 19 years, with his memorial not far away on the north wall, as is also the one for his father. The church has a facsimile copy of a memorial Missal, the Service of Holy Communion, commissioned by his father to remember Charles Prangley, known as "Doox", which is now in St George's Memorial Church,

Ypres. The illuminated manuscript was made by George Smith of Downham Market. It is most moving, as is also the joint memorial built by his father and the father of 2nd Lt Lionel Pratt of Ryston, on the boundary between Bexwell and Ryston, beside the A10.

The chancel has an east window of three lancets in Early English style, but made by the Victorians, above a carved stone reredos behind the stone altar. The 14C piscina has a simple cinquefoiled arch and a stone credence shelf, and there are three stepped seats for the sedilia. These seats were for the priest, deacon and sub-deacon to sit whilst awaiting their part in the Mass Service. Right in the south-east corner is a long horizontal shaft through the wall. The fairly plain altar rail is embellished by the embroidered kneelers recording village life here at Bexwell, including the aeroplanes that flew from Bexwell Aerodrome in the Second World War. Outside the north of the churchyard is a memorial for two RAF members who flew from Bexwell and were posthumously awarded the Victoria Cross.

1.16 Miles Away
St Edmund’s is located on a beautiful site, overlooking the town to the fens beyond. Although the building underwent an extensive 19th- century restoration, a number of earlier features survive, including a 15th-century font, a lady chapel dating from c.1500 and an eight branch glass chandelier made c.1730.
View Venue 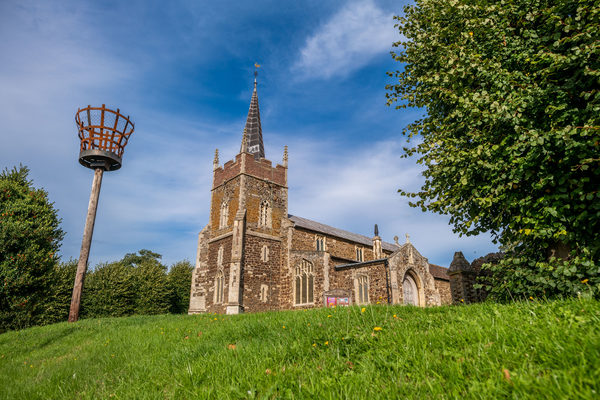 1.26 Miles Away
The Town Square is situated in the very heart of the town and is the square inhabited by the iconic Town Clock. Town Square Trading is aimed to maximize the square’s potential encompassing a range of activities from individual stalls, craft stalls, hosting public information roadshows/campaigns, advertising opportunities, product launches to a performance arena highlighting local talent.
View Venue 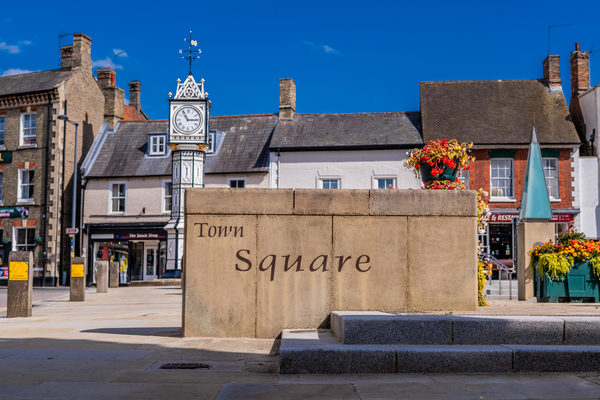 1.29 Miles Away
On the banks of the River Great Ouse, and dating back to Saxon times, Downham Market is one of Norfolk’s oldest market towns. The attractive market place is immediately identifiable by the splendidly unusual and majestic black and white clock.
View Venue 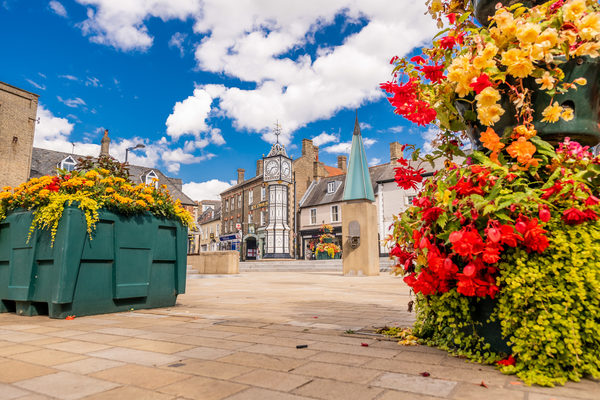 1.3 Miles Away
Downham Market has a regular, popular and thriving outdoor market held every Friday and Saturday on the Town Hall car park, next to the imposing Town Hall. The market is open between the hours of 8:00am and 4:00pm.
View Venue 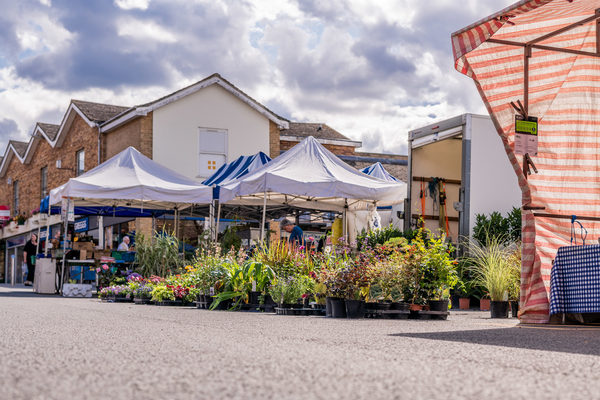 1.3 Miles Away
Wimbotsham is a village and civil parish in the English county of Norfolk. It is situated close to the River Great Ouse. It has a primary school, a local shop and a public house called "The Chequers". Also located in the village are two churches: the Church of St Mary, the Virgin; and the Wimbotsham Methodist Church. The is also a village green, village hall and recreation ground with play area.
View Venue 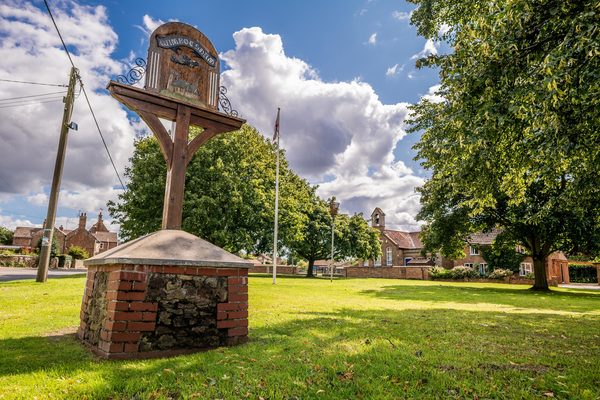