This little church in its coastal village deserves fame for its three outstanding features - it is Saxon round tower (pre-Conquest of 1066), its Norman font, and its collection of medieval glass.

This church in a tiny coastal village deserves fame for three outstanding features: its Saxon round tower, its Norman font and its collection of medieval glass. The round tower is definitely Saxon, say about 950 years old, because it has a triangular headed doorway on the first stage above the tower arch inside the church, it is constructed with some large puddingstone material near the base inside, and the thickness of the flint walls is less than that of a Norman builder. It has Saxon belfry windows constructed with flat flints set to make a round topped opening. The bottom one on the west face is a modern one made to match the others. There were similar openings on the East face, which have been blocked up on account of the present high pitched nave roof. The tower is capped with a lead roof with a nice weather vane. At one time, it had a tiled roof. A special feature here is that the base of the tower is 6 inches thicker up to a height of 10 feet. The coursing of the flints does not have the appearance of Saxon work; it may have been extensively restored, or even an outer skin of flints added.

Round towers are a unique feature of East Anglia, where there are 175 still surviving from the Saxon and Norman periods. It is conjectured that there may have been nearly 1,000 of them originally. This is one of a group of 3 in adjacent parishes, namely Titchwell, Burnham Deepdale and Burnham Norton. Before the Norman conquest of 1066, this area managed to build churches without any dressed stone, using flints and conglomerate (or puddingstone). To avoid the difficulties of corners with such material they developed a recognisable design of round tower, which was built as part of the church, or as an addition to it. Their purpose was to take bells that would summon the people to church in an age when no one had clocks. A ladder in the nave provided access to the upper floor that may also have been used as a safe place for the storage of important things.

The 1797 Restoration. Francis Blomefield describes this church, which had 'the aspect of a gloomy moss grown cavern', being changed into 'a decent place of public worship'. At that time they demolished the N aisle and S porch and opened up the East window. Soon after this Ladbrooke made his drawing which now hangs in the church, showing only buttresses in the place of the North aisle and the Norman N doorway moved to a position on the West face of the tower, so that the tower was used for a porch for a time. Also at that time the floor of the chancel was raised. New seats were added and windows repaired for a great re-opening on Christmas Day, 1797.

The records of the parish at that time show how the price of Barley doubled in the next 3 years owing to the Napoleonic war. The Ladbrooke drawing also shows a quatrefoil opening high up in the tower, which can now be found on the N side of the vestry, where it has been glazed with medieval glass fragments.

The 1855 and 1898 Restorations were done in turn by the Rev. E. G. Blyth and the Rev. E.K.Kerslake. The North aisle was rebuilt complete with new arcading, and the Norman parts of the North doorway were returned to their former position. Mr. Kerslake built the present South porch and the vestry. The present pews were also installed in 1898. Under the centre aisle is an iron grating covering a deep pit for a coke furnace that provided very effective heating. Fine headstops on the outside of the nave South windows are a feature of the Victorian restoration. Now so much restored the South wall and the West wall of this church probably still comprise some of the original Saxon walls that were built at the same time as the round tower.

Inside the tower the floor is paved with an interesting assortment of tiles. A child's stone coffin lid, 3 feet long, bears a simple cross and shaft. The bell is a particularly early one, made in King's Lynn by M. Derby in the 14th century. The flints at the head of the Saxon doorway are set back 3 inches on the jamb. This is one of the few such doorways that has a door in position. The chancel arch is perpendicular period, and as it is the only obvious feature of that great period now visible here, one might link it with a will, dated 1488, of Margaret Calver to 'making of the church'. The wrought iron screen and the modern rood were added in 1932, designed by Sir Walter Tapper. Under the crucifix is a circle in iron with IHS, the Latin symbol for 'Jesus Saviour of Men'. S.Mary and S.John stand on either side. The Norman Font once stood in the North aisle, but in 1797 it was broken on being moved, and so it was taken to Fincham Rectory for repair. However, it stayed in the garden there for some forty years before it was finally restored to its present position. Fincham church also has a broken and repaired Norman font. The one here is made from Barnack stone from Rutlandshire, and is of special interest because it shows the farming year from a working man's point of view. Read it from right to left, starting on the North face: January - Drinking from a horn; February - Feet up by the fire; March – Digging; April – Pruning; May - Rogationtide banner; June – Weeding; July – Mowing; August - Binding a sheaf; September – Threshing; October - Grinding corn; November - Pig killing; December - Feasting together. In some panels the name of the month is inscribed in Latin, e.g. Februarius. The foliage between the lions is that of the vine grown here in those days. The W side has the tree of life. The 4 base stems with Norman zigzag pattern are believed to be a reasonable copy of the original design.

The medieval glass. This church has a most varied and rich collection of early glass which is described by David J. King in his book, 'Stained Glass Tours Around Norfolk Churches'.

The West window of the North aisle has a really perfect little emblem of the Holy Trinity, showing God the Father holding Jesus his Son on the cross with a dove for the Holy Spirit flying down to us. The word 'Geld' at the bottom tells that a local Guild was donor of some of this glass. A merchant's mark at the apex signifies another donor. All this is 15th century glass.

The West window of the tower gives a lovely picture of an angel pulling triple chains attached to a censer above him. In the lower half, we see Mary Magdalene in a pink robe with a gold border holding a scroll. Her head and nimbus is drawn on a single pane quite undamaged in spite of the events of the past 500 years.

Both vestry windows are filled with medieval fragments. The top part of the East window has interesting 14th century canopy work to be compared with the 15th century architectural designs in the lower part of the same window. Some of the border panes are parts of very early heraldic glass.

Behind the pulpit is a square low-side window surrounded by early bricks and glazed with medieval glass. It has a deep red cross within a circle and dark blue infill.

The porch windows are known as the Sun and Moon on account of the heads at the top on each side. They would have come from either side of a crucifixion scene in an East window. These windows are filled with assorted fragments, including the words "Death where is thy sting".

Later Glazing. The chancel North window is in memory of Henry Cook who died at sea in 1902 and shows Jesus walking on the water and saying 'Peace . . .’ In its upper light we see Noah releasing a Dove from the ark. The chancel S windows of 1853 are made of thick moulded glass with conventional leaf designs. This was a very early form of Victorian glazing. The nave South-East window of 1873 illustrates the parable of the sower, and the nave SW window of 1914 shows Gabriel holding a lily as he approaches Mary who has a book open on her prayer desk. 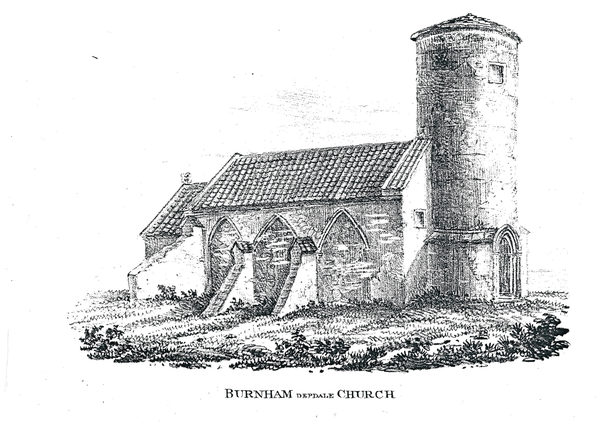 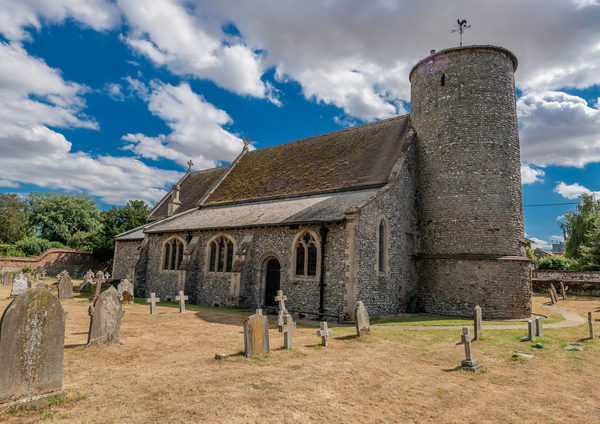 1.47 Miles Away
Branodunum is one of the eleven forts along the South and East coasts of England known as Saxon Shore Forts. The Romans built these forts during the 3rd century. At first they were used to protect and control shipping and trade around the coast; later they helped repel raiders from across the North Sea. They remained military garrisons for over 150 years before being abandoned when the Roman army withdrew from Britain.
View Venue 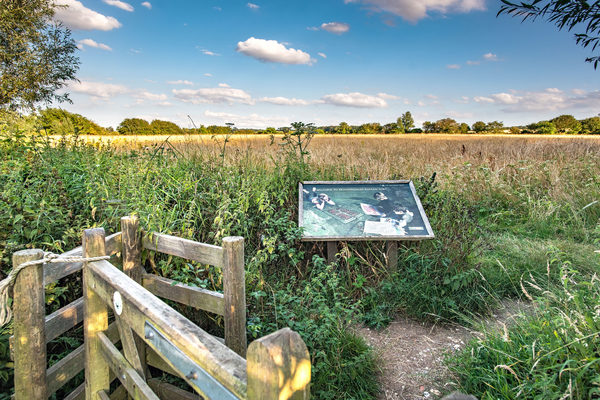 2.07 Miles Away
Brancaster beach with its wide expanse of golden sands is perfect for Summer sandcastles or Winter wanders, even on the busiest of days there is room to find your own space and get lost in its tranquil calm.
View Venue 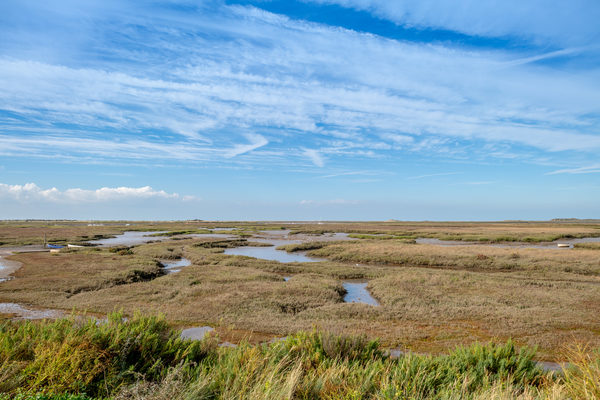 2.13 Miles Away
The Saxon round tower was built at the beginning of the first millennium, the church was extended in the 13th century, with later improvements in the 15th. It has a commanding view of the sea half a mile away. St Margaret's stands within its own burial ground; on the other side of the north bank of this is the burial area for the rest of Burnham Market.
View Venue

2.3 Miles Away
This Friary was founded in 1241 by Sir William de Caithorpe of Burnham Thorpe and Sir Roger de Hemenshale, Lord of Polstead Manor in Burnham. It is thought to be the first Carmelite Friary established in Norfolk. Its gatehouse can still be seen, with its fine 14th century decoration, to the east of the church, between the modern school building and Overy Church. The Friary occupied the land between the gatehouse and the River Burn.
View Venue

2.62 Miles Away
That there was a church at Titchwell at the end of the eleventh century is evidenced by Domesday, and much of the existing building dates from about that time. The tower is an interesting example of the many East Anglian eleventh century round towers.
View Venue 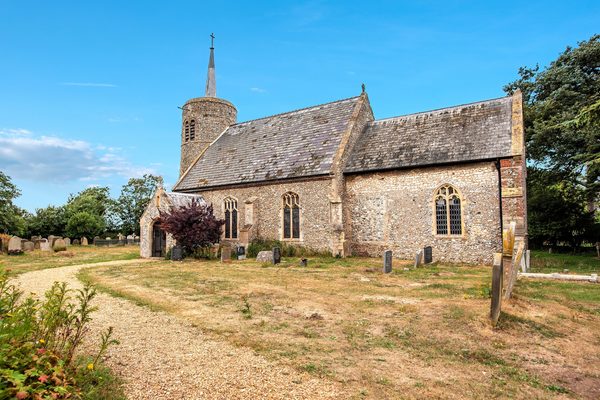