This church has been a place of prayer and worship for nearly 600 years and it is hoped that visitors will enjoy the tranquil atmosphere. The present Church was begun in 1423 to replace two earlier buildings, one of which was dedicated to St James. It is assumed that the present site of the church was formerly known by this name and possibly refers to a pilgrim cross marking the route to the Shrine at Walsingham.

Looking at the church from the south, you will see that the tower is about 16 feet (4.9m) west of the south aisle; between it and the aisle is a unique four-storey construction known as thepriest's House. Is it an integral part of the original building or a later addition, linking the Church to a free-standing tower. Experts may be divided but all agree that its main purpose was to provide a lodging-place for priests who came to officiate at Mass or conduct Baptisms and Funerals and were prevented from moving on because of adverse weather conditions - and flooding often occurred in winter and spring in the 15th and 16th centuries when the sea was much nearer to St John's.

There are four levels to the Priest's House, the one at ground level is a full length low, brick-vaulted room, with access gained to it through the larger of the two doors, side by side in the west wall. The western end of the chamber gives into a chamber in the base of the tower; the smaller door to a spiral staircase leading to the door into a chamber at the first floor level, where the priest is said to have lodged. In this area, there is evidence of storage shelves and a washing place but no sign of a fireplace and flue, and the floor is simply the rough, curved upper surface of the vault below.

Further up, the staircase leads to a passage over the priest's house chamber, which goes towards the tower, onto a small balcony, and then into the ringing chamber. Onward and upward, the top of the staircase gives access onto the south-west corner of the roof of the nave, and also into a transverse ribbed vaulted passage leading to the bottom of the spiral staircase which leads up to the tower roof. The Lower is almost entirely of 15th century construction and is a fine example of perpendicular architecture. At 85 feet (25.9m) it is the highest in Lynn Marshland and from the top, on a clear day, there is a view of the towers and spires of some 30 other churches in Marshland and beyond.

The ringing chamber of the tower contains six bells hung on a metal frame on two levels, three bells on each. The full peal was cast in 1784 by Thomas Osborn of Downham Market. In 1899 the 5th was recast and in 1947, the Treble and the 5th were recast, all three by Mears and Stainbeck

Whether you are reading these notes whilst outside the Church or inside, the Clerestory Windows are worthy of note from both sides as they form one of the best architectural features of St John's. There are 18 in all, set in an alternate arrangement of Gothic headed and circular and full of delicate tracery in the Decorated style; the thickness of the stonework is impressive and creates a beautiful effect. The only similar alternating styles in Norfolk can be seen at Snettisham and Cley-next-the-Sea. In 1987, the windows were carefully re-leaded and restored.

There is a very good collection of carved heads, both inside and outside the Church. Most of those inside are undamaged (neither by human hand nor worn by time) and represent priests, monks, nuns and possibly, some of the original workers on the building, whose mason's marks can be seen on the stonework throughout the church.

Nave and aisles. Visitors to the village are occasionally misled by the sight of the exterior of the church, thinking that is a redundant building and appears to have no roof over the nave. In 1668, the gabled roof had been lowered to become almost flat and is thus hidden by the north and south parapets. The master plumber, .John Bateman and carpenter, John Lawson who carried out the work, left evidence by carving their names and the date on the wall plates above the font.

Although much of the building remains as it was in the early 15th century, one of the main changes has been to the chancel arch whose style is that of the early 18th century. It was restyled during repairs following damage incurred when the Rood Screen was removed; traces of the original arch can be seen on the east side of the new arch. The Rood Stair is still intact and gives access to the chancel roof and up to the nave roof

Lady Chapel. In 1977 the Parochial Church Council decided to mark the Silver Jubilee of Queen Elizabeth II by restoring the south aisle to use as a chapel. For many years since the removal of old pews, resulting in four different floor levels, it had remained unused and untidy. To cover the cost of this work, funds including a number of generous gifts were quickly raised and the chapel was ready for use in November. Archdeacon George Fox dedicated the new chapel to The Blessed Virgin Mary; details of the ceremony and a record of the gifts can be seen on an inscription on the easternmost pillar of the south arcade. The splendid riddel posts with gilded angels and candle sconces, which had been in St George's church, Mexborough since 1929, were a gift from the Vernon family as recorded on a memorial plaque on the north side of the altar.

Piscina. In the south aisle wall beside the Lady Chapel altar is a carved stone piscina, used originally for washing the Communion vessels and the priest's hands during Holy Eucharist. The Holy Water runs straight to the ground and not the sewer.

Memorials. The church is rich in memorial tablets both on walls and floors, mainly for the Bell and Wright families.

Royal Arms. These are of George III from the latter part of his reign, about 1800 and are painted on canvas. They now look very dark, appearing to have been given many coats of varnish; skilful cleaning would restore the original bright colours.

At the western end of the north aisle, near the Royal Arms and the vestry, there is a memorial to Thomas Geary, who died at 17 years of age on 21 August 1832.

The font is set prominently at the western end of the nave on three stone steps which are carved to match the sanctuary steps. Dating from 1632, it is a rare example of the period and dates from the time when the Terringtons - St John and St Clement - shared the same vicar. It is well proportioned and nicely carved, with details on the stem cleverly echoing the tracery in the aisle windows. 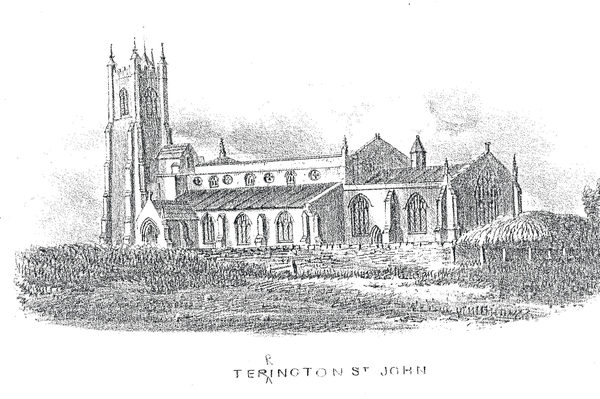 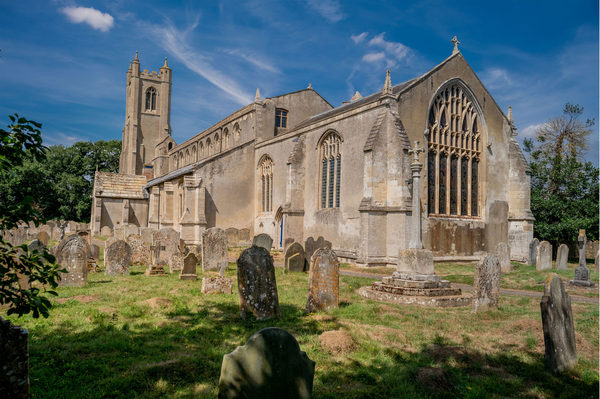 2.05 Miles Away
St Mary's is a mainly fourteenth-century cruciform church, and sits in the richest of all ecclesiastical belts that stretches from King's Lynn to Wisbech. The romantic buttressed and battlemented tower retains two bells, and within the chancel are fine monuments to the Bagges family. Parts of the church are now ruined although the tower and chancel still have a roof.
View Venue 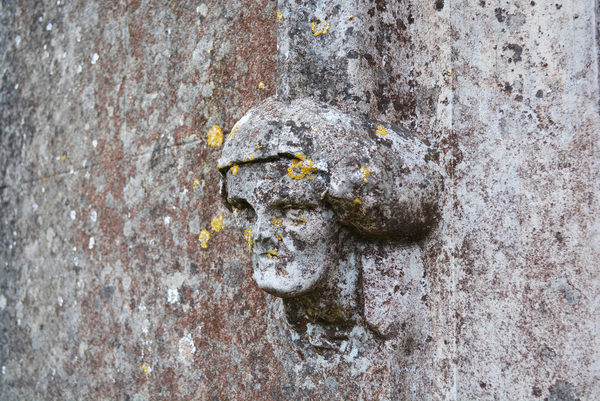 Attraction 2:
Church of All Saints, Tilney All Saints 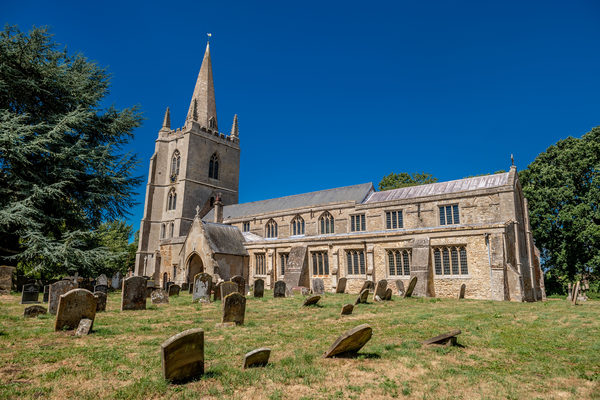 2.4 Miles Away
Walpole St. Peter's Church is simply a fenland village parish church, but its beauty has so stunned visitors that it has been called the Queen of the Marshlands and Cathedral of The Fens.
View Venue 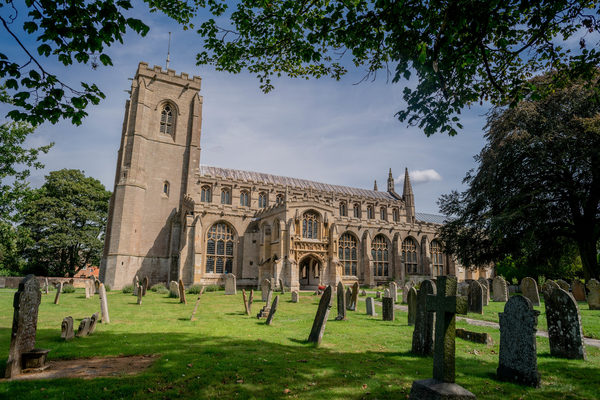 2.82 Miles Away
St Mary stands in a watery landscape next to an orchard by the River Ouse. Green stained glass casts light on row upon row of carved benches, featuring lively little wooden saints and figures in amazingly detailed dress. The font cover, too, is a fine piece of carving, dating from the Jacobean period.
View Venue 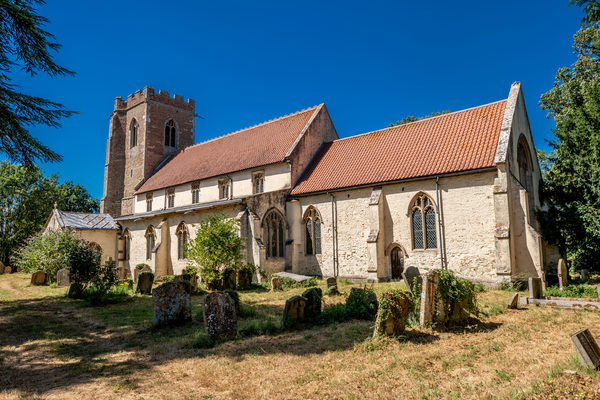 2.95 Miles Away
The Parish Church of Terrington Saint Clement that you see today is probably the third church building upon this site - although a Saxon fragment is embedded near the floor to the left of the high altar.
View Venue 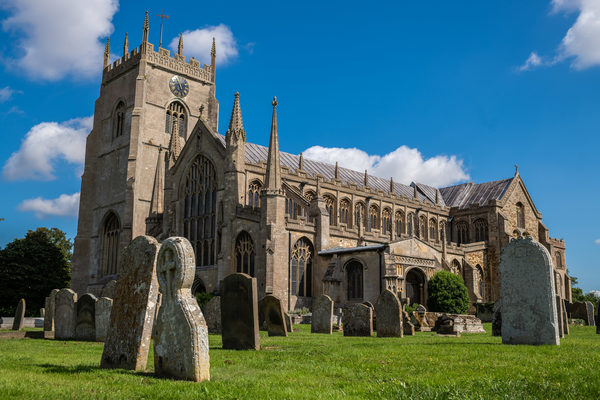